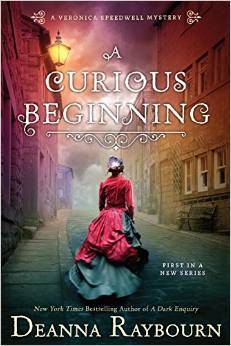 As I carefully selected my first book of 2017, my eyes landed on “A Curious Beginning.” Could this title be any more fitting?! No, the story has nothing to do with the tensions we’re all feeling in this rocky political climate. It’s a total departure from modern times, which is exactly what I need right now. I’m not a big fan of fantasy books, but lately I’ve been craving stories that take me to a land before highway bottlenecks and cell phones!  What better departure from reality than a Victorian-era mystery? Here’s a short and sweet review of “A Curious Beginning,” the first book in Deanna Raybourn’s infectious Veronica Speedwell series.

The gist: A Feisty female sleuth/butterfly scientist with a mysterious past joins forces with a hunky taxidermist to ferret out the fiend who murdered the German Baron who inexplicably brought them together.

What worked: The author has a knack for world-building and character development. She expertly painted the scene of gloomy ol’ Victorian London, making me feel like I was tagging along with Veronica and Stoker as they combed the foggy, cobblestone streets in search of clues. All of the characters are shrouded in multiple layers of mystery that will slowly unfold in the following books. I have to hand it to the author for drawing me into the fold. I have no choice but to read the next book to figure out how Veronica will elude her many assailants with some help from her hunky sidekick. I also must know about Stoker’s haunted past. What happened to him in the Amazon? What’s the story with his dead wife?!? Will he and Veronica ever get together despite their lack of romantic tension? Sorry, y’all but I wasn’t feeling it.

What didn’t work: I can’t give this book a four-starred review because there are a few problem areas. First, I’m most annoyed by Veronica’s over-the-top “I am woman, hear me roar” attitude. I’m all about girl power, but Veronica’s defiance against Victorian-era ettiquette was hard to believe. It’s as if a woman from the 21st century was dropped into the 1800s. I must admit, I really didn’t like her. In her quest to tear down the patriarchy, she’s constantly putting people in their place, and I kept feeling sorry for Stoker for having to put up with her snarky attitude.

Also, why must she be a butterfly scientist? I mean, I get that butterflies are symbolic and beautiful, but she’s living in an era rife with disease. Seems like a waste of time and talent when she could be finding a cure to scarlet fever or smallpox.

In short: Despite my grievances, this book is a worthwhile read for anyone who enjoys a good historical mystery. Judging by all the rave reviews on Goodreads, a lot of ladies love Veronica’s sardonic wit. I suppose I can get past her annoying qualities to get through the next book. As for whether I’ll finish the series, that remains to be seen. A curious beginning indeed!