Last Halloween I wandered into a random book tent at the Texas Book Festival and found myself chatting with Sylvia Dickey Smith, author of  the “Third Eye” mystery book series. Won over by her sweet southern charm, I bought a copy of  “Deadly Sins, Deadly Secrets,” stashed it in my bag of books and moseyed on my way in hopes of bumping into one of my favorite Texas authors. Not expecting too much from an unknown mystery author, I decided to scan the first couple pages just to see if it was worth my time. Fifty pages later, I found myself fully immersed in an absorbing world of romance, mystery and (be still my heart!) ghosts.

Move over Stephanie Plum and Annie Darling because there’s a new sassy sleuth on the scene and boy is she a firecracker! After escaping decades of confinement as a preacher’s wife, Sidra Smart returns to her sleepy East Texas hamlet to take over the reigns of her dead brother’s “Third Eye” detective agency. Just when she starts to get her bearings, her office burns to the ground and her apartment is yanked out from under her. With an empty wallet and limited options, Sidra has no alternative but to room with her endearingly neurotic aunt in a spooky 19th century haunted house. Just when life couldn’t get more complicated, she befriends a crotchety geezer in desperate need of proving his son’s innocence in a grizzly murder case. With a little help from a ghostly sidekick, a lanky, floppy-eared hound, a meddlesome aunt, and a trusty Cajun-tongued detective, Sidra combs through a lurid web of secrets, lies and deceit.

In the third installment of Smith’s mystery series, “Dead Wreckoning,” Sidra finds herself in a boatload of trouble – pun intended! 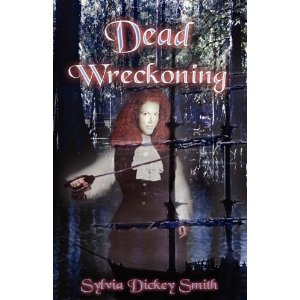 Strapped for cash and in desperate need of a paying client, the last thing Sidra needs is a pro-bono case. But when Boo, a cantankerous old recluse who resides in the bellows of the Big Thicket, is framed for a murder involving a ghost ship and modern-day pirates – how could Sidra say no? Against the wishes of her mentor, George Leger, and her protective fiancé,  the ferociously independent PI probes into the case and finds that even the people she trusts the most are not who they appear to be. Steeped in a humid, eerie deep south atmosphere, “Dead Wreckoning” is a solid who-done-it rife with all my favorite elements – loveable furry companions, ghosts, mystery and romance!

Smith, who has now been added to my dirty dozen of top mystery authors, has created a charming and winning character in Sidra Smart. With her atmospheric descriptions of rural East Texas, and character-driven plots, she has a real knack for crafting a quality thriller.