Halloween is almost here!!! In just a couple of weeks, I’m busting out all my glowing jack-o-lanterns, dangling demonic clowns and pet costumes for a Halloween Extravaganza 2016! In the meantime, the critters and I are getting into the spirit with these spooky reads. From campy horror movie fun to kid-friendly ghost hunts to encounters with the second kind, CeeCee and Gizzy picked out a diverse array of books that appeal to just about anyone. Readers beware, you’re in for a scare!

Pros: This is a fun summer read for fans of Goonies, Stand by Me, and It. The author took his time with the setting and really lured me into the sleepy Midwestern town where kids filled thieir long summer days playing pickup baseball, riding around town on bikes and poking around in forbidden places. I also really enjoy a good campy horror movie setting, which this book delivers in spades. There’s a lot of creepy stuff happening to these kids. There’s reanimated corpses, a demonic truck driver, gun-toting bullies and the Mount Everest of haunted schools! A word to the wise: Read this with the lights on.

Cons: This 500+ book is waaaaaay longer than it needs to be. There were so many scenes that didn’t apply to the mystery of the haunted school. I get that the author really wanted to transport his readers back into his boyhood days in the 1960s, however the meticulous details really bogged down the story. Listening to this book on audio is on par with watching a movie in slow motion. My mind kept wandering off, and I had to rewind the darn thing over and over again. Not willing to give up without a fight, I trudged onward and finished this thing in a couple of weeks.

The Tale of Halcyon Crane by Wendy Webb 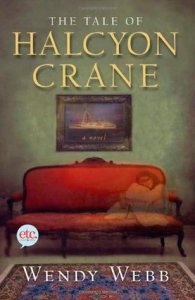 Pros: This is the most perfect story to sink yourself into on a rainy day. Wendy Webb is a master at setting up the scene for a good ol’ fashioned ghost story. Essentially she is the American version of Susan Hill. I just love how she writes–and that she chose to set this story in a town modeled after Mackinac Island! It was so easy to sink myself into the deliciously spooky small island setting filled with mystery and lore. How cool would it be to inherit a haunted mansion on a hill overlooking a foggy coastline?!? If you’re a fan of not-so-scary ghost stories filled with romance and mystery, this one’s for you.

Cons: This book will not appeal to those who are looking for visceral thrills. It’s a very watered down ghost story that’s heavy on atmosphere and romance. Essentially it’s something you’d see on the Lifetime Channel, only SO much better because you can use your imagination with the setting and the characters aren’t washed-up actors from Full House. Going into this book, I was already aware that it would be more of a romance with a twinge of mystery. But if you’re expecting something more, you’re going to be disappointed.

The Ghosts of Tupelo Landing by Sheila Turnage 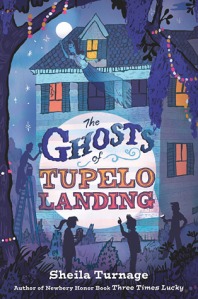 Pros: This is YA storytelling at its finest! Where do I begin with all the pros? The small Southern town setting, the loveable characters, the tightly-plotted mystery–everything about this book makes me happy. I loved immersing myself into the sleepy little town of Tupelo Landing, where people are enjoying life at a much slower pace than us city folk. I also enjoyed the mystery of the ghost a the old inn, and the ongoing mystery of Mo’s “upstream mother.” This is a fun, non-scary ghost story mixed with a good ol’ fashioned Nancy Drew mystery.

Cons: My only gripe–and it’s a very small annoyance–is that Mo is just a little too precocious. It takes decades for us mere mortals to interpret the world the way she does. Also, she’s teetering on the brink of becoming too obnoxious. I appreciate that she has a lot of moxy, yet she’s a little too in-your-face for her own good. She needs to tone it down in the next book.

Pros: I enjoyed the spooky haunted hotel setting, and the author did a fine job painting a foreboding atmosphere as the tourists roamed from room to room. They’re led by a diabolical tour guide with a hidden agenda. It’s up to the reader to figure out his end game–and how it all unfolds at the end of the tour. The big plot twist and the fantastic, Tim Curry-esque narrator almost made up for the long hours of tedious storytelling.

Cons: I was expecting some gothic ghost stories, but these tales were more on par with the bizarre sci-fi stuff you’d see in an old-school Twilight Zone episode. And to be honest, I’m not a big fan of the authors writing style. The stories got muddled in the superfluous details, causing my mind to wander off into my never-ending to-do lists. Needless to say, this was not my cup of tea, but it could possibly appeal to Twilight Zone fans.